The chatty family at breakfast–who shares an understanding of the role of stress in caregiving those with special needs. How did Alicia do on her conference call, I wonder?

Biking hither and yon, a velocipede pedestrian torquing her camera like an unwieldy bolo tie at every scenic vista. I’m kind of suprised I didn’t garrote myself with my Canon by accident.

What I have learned thus far:

People on vacation are willing to talk to strangers–probably in greater detail than they would anywhere else. Especially the newly weds.

Congrats once again to the couple from Holland who showed me their wedding photos and chatted in the shade by the Arch Rock waiting area. I’ll make sure to check out Kollen Park the next time I’m visiting Holland. May you live a long and happy life together, may all your worries be in your past.

Seriously, for such a small island, there is an inordinate number of hills. And rocks. And horse hockey.

I managed the tour of the Grand Hotel, getting some good photos and ideas for the finale–yet to be written–but what I really gained was an appreciation for the staff. The many kind people who work there–as well as a mother who took time to chat with me while her son ‘shadowed’ an employee in the program in hopes he might work there himself when he graduates from high school. 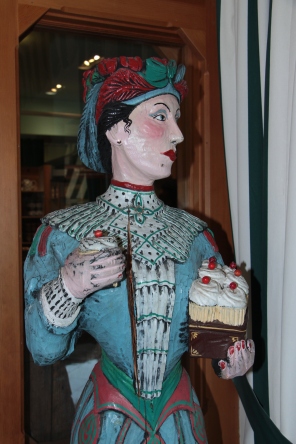 I shall take my sweeties and go thither…

Who doesn’t walk their bicycle with an umbrella on a sunny day?

This mom had worked there in the summers of her youth–right around the time the hotel was last renovated. She confirmed that the wallpaper was original, they have no ‘servant stairwell’ (cross that one off the list), and that the wait staff, musicians, and bartenders were housed in buildings down from the hotel, back in the day. The building women stayed in was the John Jacob Astor house which is now called The Grand Cottage. The men were housed elsewhere–possibly in a building called “The Twilight” which is a forest green house down the hill, take a left, and the first on the right. (You can’t miss it.)**

Slipping in and around busy bartenders, waiters, flower vendors, and the myriad other people working the hotel, I was routinely helped, with courteous, generous insistence.

My favorite stop had to be the Tea Shop. The Jamaican clerks were all natural charm and chatted about tea choices and even laughed when I read off a menu item identifying the contents of a $130 cocktail available in the nearby bar.***

I finally asked how I could say ‘Hello’ in the patois of Jamaica. A painstaking effort was made to help me try and say it right: ‘Wha Gwahn’, is what it sounded like. Which could almost be a contraction of ‘What’s going on!” I also practiced the appropriate reply: “Arri, mon!” (Perhaps, ‘All right, man?”) Strangely, the language seems even harder to speak when stone cold sober. Go figure.

I ordered my tea and wandered off to drink it, forgetting entirely to pay. The assistant apologetically brought this to my attention–as if they were at fault for wanting payment!

The young lady and I chatted for a bit. I told her about my son and asked her about autism awareness in her native land. She told me that everyone knows about autism because a great lady wrote a book about her son and it became very well known. I only wish I had taken down the name of the book! Antonette concluded by saying, “Don’t be afraid to bring your boy. Jamaica will be a great place for him. It’s all love!”

How can you turn down an invitation like that?

Her manager called her back to duty, I hope she wasn’t in trouble for taking so much time with me. If he only knew the kindness of such a gift. The thought that somewhere, out there, is a world full of people who would welcome my son with open arms.

*As dedicated a writer as I am, I wasn’t willing to get arrested to achieve my goals.

**Maybe you can’t miss it, but I certainly did. It is only gravity that keeps me from wandering off this planet by mistake.

***Maybe you’d prefer to save money and make the 125th Anniversary Cocktail at home? A quick search online reveals a bottle of the 100-year Grand Marnier Centenaire costs only $116.00, the 150 Anniversaire Grand Marnier comes in at $219.99 a bottle (Kaching!, and edible gold leaf–strangely enough–is the least expensive ingredient. It’s available, of all places, at Walmart for $76.45 for a pack of 25 squares. Don’t believe me? Check it out here:  Gold Leaf at Wally World.

And bonus points go out to anyone who noticed what is particularly strange about the bicycle depicted in the close-up of the wallpaper. I didn’t see it the first dozen or so times I tried to upload the pic from a location Where the Wifi was Iffy. (Which once I wrote that down, looked like a book title for a modern day sequel to Where the Wild Things Are.)